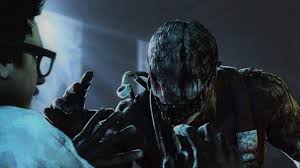 The first game I'm going to reveiw is Dead by Daylight, designed by: Dave Richard. In my opinion this is a very fun survival horror game should not be played by people under the age of 13. This is a gory game that will either make your heart rate get going or get you sitting up in your seat trying to catch a survivor.

In this game you can either be a survivor or a killer. If you want to be a survivor than you can choose between quite a few options. Each character in this game has unique abilities, like one survivor can do actions with less noise. You can also be a killer who also have their own abilities. Once you have found what character you want to be if your a killer than you make a lobby and if your a survivor than you join a lobby -- if you are a survivor than it can take a while to find a game sometimes --. Once your in the game as a surviver you have to go around fixing generators to power up a door to leave the area; But it takes time to do and ther are skill checks where you have to press a button at a certain time or else you lose progress and notify the killer where you are. if the killer starts to get close to you than you can hear a heart beat, the faster the heart beat the closer the killer is. If the killer see's you then they will chace after you so that they can hit you with their weapon. If you get hit then you move slower and make grunting noises that the killer can hear. The good thing is that the killer is an online player so you can easily juke them or hide in areas that are hard to see. if the killer hits you while your still hurt than you will go into the dying state, where you are on the ground crawling. Then the killer will pick you up and put you on a hook as a sacrifice to entity. You hang from the hook as your life slowly drops and you have an oportunity to try to unhook youself. The thing is that there is only a 4% chance of you getting off, and if you attemt and fail then you lose heath. Once you reach half health then the entity tries to kill you and you have to spam a button to not die. None of this has to happen if you have good teammates, they can come and unhook you. If you get hooked a third time then you will get killed, if you got to where you had to spam the button then you will die the next time you get put on the hook. When you are the killer you have to go around trying to sacrifice the 4 survivors by sacrificing them to the entity. If the survivors get 5 genoratots done then the gates will be powered. If they open the gates they can escape and they will win.

I think this game is really fun to play, and it is more fun being the survivor because you have teammates that you can interact with and you feel a lot more powerful. It is also very saticfying if you juke the killer and escape. I think this is a great game that is a lot of fun, but sometimes it can be a little annoying if you are trying to play survivors with an online friend: it can take over 30 minutes to find a game.Dead by Daylight 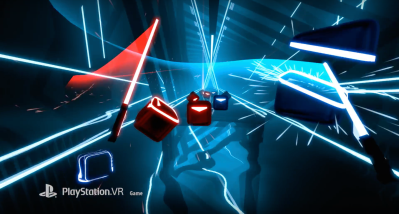 This is a great game that lets you go into the virtual world and slice cubes in patterns, to an awsome beat. Ther are a lot of songs that you can play and have add ons that alows you to do things to the song: speed up/slow down the song. I think that this is a great game that has a head banging beat, and will get you sweating. This game is an awsome concept that is really fun to get in to. There is not much else to say exept that if you want to feel like a virtual drummer this game is for you.